There have been two installments thus far, the third one is written here.

Hope you enjoy it… 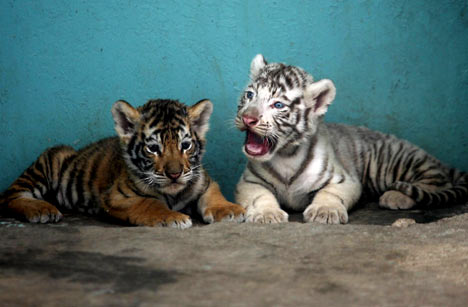 At first it had only been a pair of cubs, that some of the wealthier people had taken to calling Indira and Jadoo. Names that would eventually stick because for many of the people in politics they had come to mean something. Some distinguished lineage of politicians if you followed the comments closely. More revered names if you listened to her father and some of the older men in the village. Either way, Mrs. Drummer had not been ensnared with or too conscious of the names, because as the tigers were growing up they had become more and more delightful.

Although over the years some of the younger people had taken to calling them Indy and Jade. She suspected that part of it had been due to the popularity of American movies like Indiana Jones, but since those movies had died out over the years – she could never be certain. But with respect to the latter nickname, what was irrefutable for her was the fact that there had never been anything green about the tigers, unless you considered the huge fig leaves they usually slept on. Or which helped sometimes to keep them out of the heat.

Who knows where a name really comes from? – Google Search Image

Like most children her own age, Mrs. Drummer had gone with her father to the local zoo, when the cubs had first been acquired, so that she could get a good look at them (so that, just like everyone else, she could say that she had been their to see their arrival.

Before they had been sent out into the world – to the neighbouring villages where other people would also get a good look at them. This of course was also before they formed a strong bond, made a family and moved away to a more remote area. In truth, back then there had been various plans for the two lovable creatures – in one of them they be taken from one country to another so that the people would be able to have their fill of them. In the end though, that plan and many others were scrapped, because Indira, the prettier one – the female – would often become temperamental. The zookeepers dealt with her as best as they could – in some respects at first, they treated her as though she was a human: first, they threw medicine at the problem, then food, and then finally it was established that what she needed was a man. A male tiger to be more precise, even though they had reservations about them at first because the two of them had the same parents.

So the money to earned from their initial trip was used in the end to furnish Indira with a more suitable mate. Then the two of them would be bred, so that eventually they would have cubs. Baby tigers who would then be reared by Indy and Jade.

A fair trade off everyone agreed if in the end it produced a more stable environment for the animals that lived within their ecosystem. Especially since our society was the best model upon which to base this experiment. Where some scientist wondered if it was wise to create a habitat for tigers so close to their human environment. People on both sides of the argument were enthused and impassioned, but for the supporters who refused to back down, they kept saying how lucky the people were to have after ten years, a cohesive animal kingdom that boasted well-over fifty odd tigers.

Some of whom were in hiding, and waiting to find a safer place, one where they would be able to construct their own living environment. Periodically, Mrs. Drummer and her father would go out on hunts in search of them. Just so that they could count and make note of them. Over the years, Mrs. Drummer and her father had been two of their strongest supporters. And they were always happy to see them when the size of their community grew, because then people would be able to go out on safaris,

Out on a safari – Google Search Image

sometimes they would also point weapons at them. Since her father and the other men of the village had teamed up with some scientists, their role was simply like that of a census taker, to tag them so that they knew where they were, how large their family was, and then they would be done with it.

The story continues next Wednesday.

Hope you like what you read so far, and if this is your first time reading Animals too Have Stories to Tell, do go back and check out part one and part two.

And like always, thanks for reading, and do come again!

Have a fantastic weekend!